1964: With some young Haroldswick players improving, Unst made 4 changes to the side with brothers George and Laurence Ewen, Alastair Hughson and Laurie Henderson coming into a side which now boasted eight players with either junior or senior Shetland caps. This formidable line up went onto win their first Parish cup, beating Virkie 13-1 and going onto beat Whalsay 4-2 in the final.

1965: The following year Unst repeated the feat, beating Burra and Whalsay to reach the final against Sandwich at Gilbertson park. Unst went on to win 3-1 despite slippery underfoot conditions making play difficult.

1967: After a disappointing 1966, in 1967 Unst produced arguably their greatest ever team. Beating Whalsay 6-1 after a replay in the semi-final they went on to conquer Southern League champions Quendale 5-0 in the final with goals from Ron Ampleford, George Jamieson, Ian Spence, George Ewen and Charlie Spence.

2000: High after a win in the semi-finals, captain David Niven lead his team to the first Parish Cup victory in 33 years. Goals scored in the first half by Jonathan Henderson and Nigel Llewellyn had Unst fans in raptures. At 90 minutes, the score was now 2-2 so it was on to extra time. During the first 15 minutes, Jonathan Henderson hit the back of the net once more, sealing the Unst victory. To complete an amazing double, 4 days later, Unst under-21s played
Delting in the final of the Mitchell Johnston Parish Cup. As with their senior counterparts, the match played at Brae had finished 2-2. Unst then went on to win the ensuing penalty shoot-out

2012: After defeating the West Side 7-1 in the semi-final, Unst found themselves up against a strong Whitedale team determined to get their name on the trophy. There were over 1000 people there to watch the final at the Gilbertson Park, with the majority rooting for the Britain’s most northerly football team. In what was a closely contested match, Unst were the victors as the final score line read 3-1 to the boys in blue and white. Scorers for Unst were David and Erik Thomson, the latter also picking up the man of the match award for an outstanding shift which culminated in a glorious individual goal. 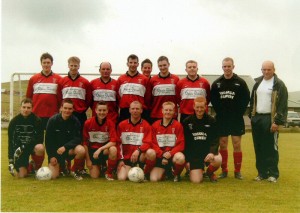